Filed under: Marketing Strategies, The Power of Persuasion, Observations From the Field, Social Media — @ 8:22 am

My nephew is going to eat at Roast Sandwich House with his friends, thanks to a picture posted on Facebook (which he doesn’t use) by a girl (who he doesn’t know). Here’s the story…followed by a million dollar marketing question:

Some girl Amanda (a stranger to me as well) posted this picture on Facebook of Roast’s “Buffalo Organic Chicken Mac-n-Cheese Grilled Cheese.” 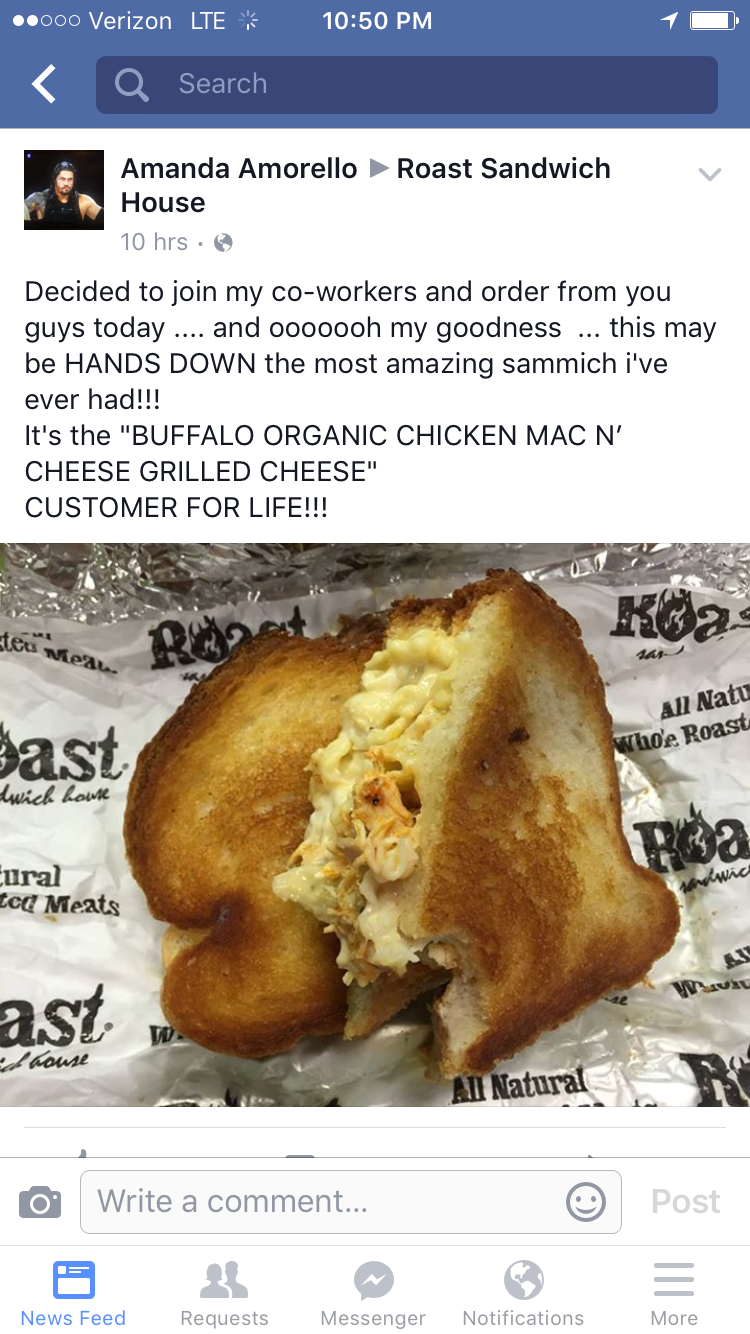 A gent named Chris liked her photo. I’ve not seen or spoken to Chris in around five years, but we’re friends on Facebook. And that photo appeared in my news feed because Chris liked it.  I knew the moment I saw it that my nephew would LOVE it…but I’m not friends with him on Facebook (because no self-respecting teenager uses Facebook).  So I took a screen-shot of the post and texted it to him.  He responded with all sorts of “OMGs” and drooled on his phone…and next thing you know…he’s gathering up friends to go eat there.

So basically, a friend of my friend of five years ago recommended a sandwich to my nephew and his friends. And none of us have ever spoken or discussed this in any way…and most of us are strangers.

NO ONE takes a picture of a plain ol’ turkey sammich. Why bother? But a Buffalo Organic Chicken Mac-n-Cheese Grilled Cheese?  That sucker earns you bragging rights on social media.  So, yes…it might be harder on the operation to produce AMAZING sandwiches.  And it might require more ingredients.  And it’s probably much more work.  But it made Amanda take a picture and share it with her friends, and that marketing power is priceless.

The point is…be interesting. Be different.  Be unexpected.  Be unique.  Make the time…make the investment…dedicate the brainpower.  If you do unusual things or offer unusual products, people will want to capture and share the story.  And you’ll be rewarded with an exponential (and free) sales force…even if they’re not on Facebook.

Thank you, Amanda…whoever you are. And you’re welcome, Roast Sandwich House…as you’ll be seeing a lot of my nephew in the future.