Filed under: Customer Service, Marketing Strategies, Observations From the Field, This is Cool — @ 8:00 am

The bedside table at the Kimpton Hotel Monaco Pittsburgh made me swoon with joy. 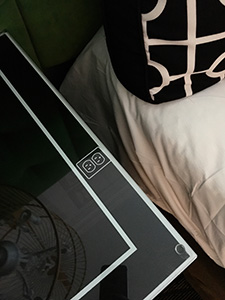 It was such a pleasure to be spared the usual contortions of locating the closest power outlet to the bed: it was directly under the outlet icon.  The fact that it was done in such a clever way was just a bonus…and ensured that I’d remember it.

Design details like that might seem insignificant, but actually they wield tremendous power.  Guests on mental autopilot or simply focused on other things are instantly snapped into focus on YOU.  It cuts through their mental clutter and seduces them into being present in the moment, aware of their surroundings, and with a small zing of pleasant feeling toward you.  Without that design detail, they are perhaps allowed to be indifferent toward you…and in the competitive world of hospitality, that will never do. 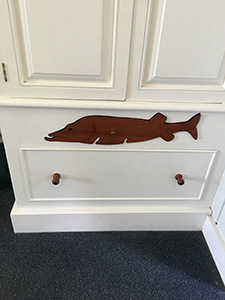 …until I noticed the tiny knob: 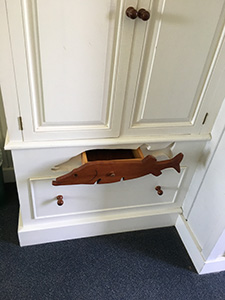 And when I walked into a gas station restroom in upstate NY, this was the last thing I expected to see: 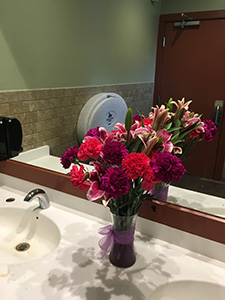 Did it make me smile after two hours of grueling traffic?  You bet it did.  Seems silly, but it really did.

You can unleash this design-detail power in literally any aspect of guest touch points.  You don’t have to do it EVERYWHERE at EVERY touch point… in fact, that would create sensory overload and then dilute the power of the surprise.  And indeed, it doesn’t have to be revolutionary or cost a ton of money…it just has to provide an unexpected “ah-ha” moment.

Look at these Do Not Disturb (DND) signs at The Quarterdeck Resort in Nova Scotia: 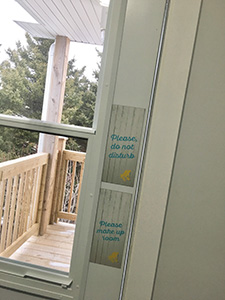 Magnetic DND signs solve soooooo many problems, especially for hotel rooms that open directly to the outdoors.  And anyone who has ever been annoyed by their DND sign falling off the doorknob or blowing away in the wind will instinctively – and involuntarily – think “wow that’s cool” the moment they see these. 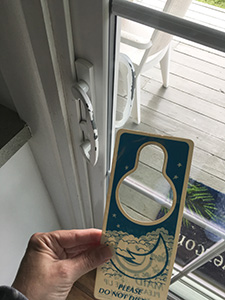 Luckily, I had a bandaid in my travel bag, so we were able to (literally) doctor the DND sign to the glass door.

And here’s a parting tip.  Design not your thing, or maybe you’re afraid of the cost?  You can achieve the same zing-of-joy with clever signs.